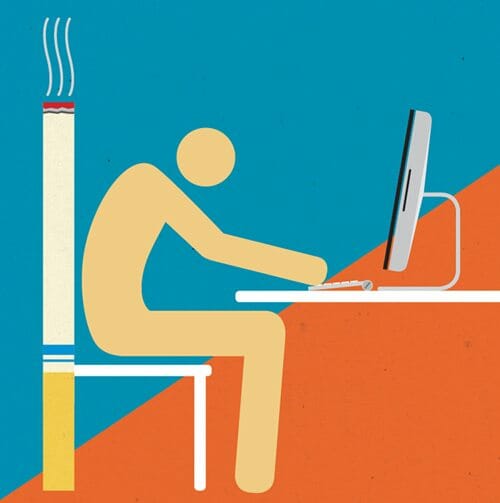 You are probably, right now, comfortably sitting. While now seated, you are probably supposed to be working instead of reading these cool articles – yes?

That is between you and your employer.

That sitting part though – that is business about which your body may take issue.

Evidently sitting is the new smoking. Smoking is something you can quit to make the single most significant improvement in your health. Is quitting sitting as hard as quitting smoking? Perhaps – but alas we put the cart before the horse. Let’s first look at the problem with how many Americans spend almost all of their time at work and at home – on their duffs.

Studies show that most americans spend most of our waking time sitting and doing next to nothing – physically. We watch tons of TV, sit at our computers and work all day (or web surf) and we sit in our cars and curse the traffic for longer than we like. All these things are sedentary activities which are killing us. Many recent studies support this. One study by Charles E. Matthews and company showed that even exercise does little to counter all of our infernal sitting!

Some of the health issues that be caused by incessant inactivity are as follows:

So what can we do about it?

I understand that I am quite fortunate in that I stand most of the day teaching American Heart Association CPR classes. I do have a drafting desk that I use to do the administrative side of my work. Standing has made a big difference. I noticed the difference when our offices were in transition during the summer. For 3 months this past year sitting at my desk was the only option. I felt more fatigued at the end of the day, felt less productive during the day and did gain some weight. I will blame the weight on the desk, you can decide if that’s an excuse or not.

Get a tall desk – try standing for a few months – let me know what you think about not sitting!