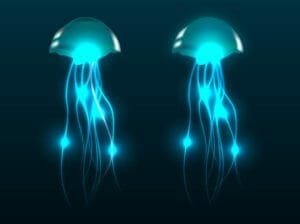 There are so many CPR and First Aid myths out there it’s quite remarkable. One of my favorites is that you should pee on jellyfish stings. What in the world!?

This has been perpetuated even on some of the most popular TV shows on television. NBC’s Friends even had an episode that lampooned the myth that you should pee on a jellyfish sting. It’s funny, let’s face it. Especially cause it doesn’t work.

Anyway – Jellyfish stings aren’t going to be helped by peeing on them. Just don’t do that. It can make the stings worse actually.

Jellyfish stings happen when you come into contact with the little stringies that hang down underneath the jellyfish. On these stringies are nematocysts. When you touch them, they kind of turn inside out, shooting a really thin stinger string into you releasing venom into your body. I can’t believe this hasn’t been made into a science fiction movie actually. It’s pretty horrifying and amazing at the same time.

Pee belongs in the toilet, not on your jellyfish stings!

When you pee on a jellyfish sting, it hurts worse – AND YOU WERE JUST PEED ON!

In our CPR certification classes, we teach you how to really deal with jellyfish stings.

If you have jellyfish stings – do the following:

There was a study done in Australia recently that indicated there might be problems with using vinegar. Discover Magazine describes the issues and expresses caution in drawing conclusions yet. The media has once again overstepped their reporting in assuming one study, with possible issues with methodology, should single handedly reverse 30 years of effective treatment of jellyfish stings using vinegar.

In summary – use your head and use vinegar, not your pee on jellyfish stings.